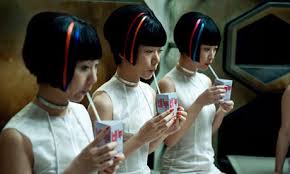 2012, England. On the run from an imprisoned author’s brothers, publisher Tim Cavendish discovers that the ‘hotel’ where his own vengeful bother has sent him to hide is an old people’s home. Cavendish breaks out with three others and, reunited with his childhood sweetheart, writes his memoirs.

2144 Neo Seoul. Prior to her execution, cloned ‘Fabricant’ restaurant servant Sonmi-451 recounts to an Archivist how, rescued by resistance fighter Hae-joo Chang, she came to broadcast her revolutionary ‘Revelations’ exposing horrific iniquities in the corporate food chain.

‘106 Winters after the Fall’, Big Island. ‘Valleysman’ Zachry reluctantly guides the technologically advanced ‘Prescient’ Meronym through cannibal territory to a taboo mountaintop to transmit a rescue appeal to off-world colonies. Meronym reveals that the Valleysmen’s goddess Sonmi was a human revolutionary, and helps Zachry against cannibal attack. Decades later and off-planet, Zachry, married to Meronym, tells his grandchildren stories. 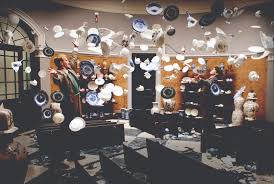 many plates in the air

Review: David Mitchell’s Cloud Atlas (2004), with its elaborate ‘Chinese box’ arrangement of six interpolated narratives that fan out from the book’s centre according to a strictly observed ring composition, is one of those novels that might naturally be described as ‘unfilmable’. Of course, such a label is as much challenge as deterrent to filmmakers, and it could now equally be claimed that in adapting Mitchell’s book for the big screen, writer/directors Lana and Andy Wachowski and Tom Tykwer have crafted a film whose decidedly cinematic syntax of cross-cutting, montage and graphic matches makes the finished product – a feverish interweaving of multiple storylines in various genres – seem conversely ‘unnovelisable’. If anything, the film’s structure is even more complex than the book’s, as the six narrative strands are cut up and reordered in such a way that they appear to be unfolding simultaneously across gulfs of time and space, while pursuing a filmic grammar that is surprisingly easy to ‘read’ (but will certainly repay revisits).

If Cloud Atlas opens with old, scarred Zachry (Tom Hanks) telling yarns under a starry sky, dressed atavistically like an ancient goatherd and speaking in a primitive-sounding patois, this is in fact the film’s chronological endpoint (and, confusingly, the source novel’s midpoint), set in some far-off, indeed off-world, 24th-century future – although it might just as well be a scene from early in the Book of Genesis, at the beginning of all humanity. An exile trying to make a new start, Zachry cuts a post-apocalyptic, post-lapsarian figure in a film that comes with many a Fall of Man or Woman (from windows, off bridges, down mountains) – and Zachry’s framing tale of his younger, Earth-bound adventures will involve, significantly, a demonic tempter in the guise of Old Georgie (Hugo Weaving). This smooth-tongued, serpentine Satan may just be a projection of Zachry’s conflicted psychology, but he is also legion, with Weaving appearing as a different figure of menace in every section of Cloud Atlas, much as he played an ever-replicating number of Smiths in the Wachowskis’ previous Matrix trilogy (which is, along with Soylent Green, Akira and the New Testament, referenced and refashioned in Cloud Atlas‘ dystopian Neo Seoul section).

Not that Weaving is alone in his cross-character devilry; for, with almost all of the film’s main players taking on multiple roles across the different narratives, Hanks can be variously Zachry young and old, a diabolical doctor, a predatory hotelier, a noble physicist, an Irish gangster/author, and even (reflexively) a film actor, while other cast members get to transcend (through makeup) the boundaries of race and gender (the latter no doubt of special interest to Lana né Laurence Wachowski). Weaving, for example, hams it up in the 2012-set strand as a Nurse Ratched figure, whereas Doona Bae plays not only a racist slaver’s Caucasian daughter and a ‘wetback’ labourer, but also, in the Neo Seoul section, multiple versions of a cloned ‘Fabricant’ (more reflexivity). Such radical cross-casting befits a film that, like the Cloud Atlas Sextet which gives it its title, comprises six mutating variations on a single theme.

“There are”, as Robert Frobisher (Ben Whishaw) says of his musical composition in yet another of the film’s self-conscious flourishes, “whole movements of the Atlas that I wrote imagining us meeting again and again in different times”. And so actors reappear and reencounter themselves in different guises across the film’s chronological sweep, ringing the narrative changes, just as certain motifs in the film – cannibalisms metaphorical and literal, forbidden relationships, transgressed conventions, ramifying moral choices, oppressive conservatism, revolutionary self-sacrifice, the revelations and transmissions of suppressed truth – are made both to recur and to shift from one section to the next. Meanwhile a striking comet-shaped birthmark shared by six protagonists who are otherwise separated by time, unrelated by blood and each played by a different actor, suggests a motif of metempsychosis that is made explicit in the Seventies-set story (where past lives and Carlos Castaneda are duly namechecked) and is matched by the evolving, reincarnating forms of the film’s stories. Little wonder Tom Tykwer, who first broke out with the narrative variegation of Run Lola Run (Lola Rennt, 1998), was drawn to Mitchell’s novel.

In addition to their strong family resemblance through shared casting and theme, the stories of Cloud Atlas also form a genealogical chain of tradition and influence, culminating in Zachry’s descendant fireside tale of “ancestors howlin’ at you, yibberin’ stories, all voices tied up into one”. For  the 1849 seafaring diaries of Adam Ewing (Jim Sturgess) that constitute the first story are then read in 1936 by Frobisher near Edinburgh (Zedelghem in the novel) as he conceives his musical sextet; in 1973, after a chance encounter with Frobisher’s one-time lover Rufus Sixsmith (James D’Arcy), journalist Luisa Rey (Halle Berry) reads Frobisher’s love letters and listens to his Cloud Atlas Symphony as she investigates an industrial cover-up; in 2012, craven publisher Timothy Cavendish (Jim Broadbent) reads a manuscript of Rey’s first mystery as he rides the train to a future that forks between premature old age and renewed youthful romance; in 2144, after illicitly viewing the film version of Cavendish’s ‘ghastly ordeal’ (and small-scale rebellion) at a care home, cloned waitress Sonmi-451 (Bae) is animated to lead a revolution against the prevailing Corpocracy; 106 winters after the apocalyptic Fall, Zachry and his fellow Valleysmen idolise Sonmi as their divine Messiah, regarding her recorded Revelations as Holy Scriptures.

In this game of diegetic pass-the-parcel, it is not merely characters’ transformative decisions and deeds, but also the communication of these down the ages, which ensures that, for all the types of human devilry on display here, there is always a slender lineage of defiant resistance to furnish the requisite counterforce. Luisa Rey may wonder “why we keep making the same mistakes over and over”,  but she herself steps aside from this cycle of repeated errors, and is inspired in part by the dissident examples of previous generations to help expose corporate wrongdoing and avert ecological catastrophe. It is not that her actions forestall further environmental disasters down the line (2144’s Neo Seoul is built over a city buried beneath rising waters, and the subsequent ‘Fall’ has led to the poisoning of the entire planet), any more than Ewing’s conversion to Abolitionism prevents slavery returning in future forms (like the Fabricants). Rather, the heterodox heroes of these stories, with their embrace of love, truth and freedom above all else, represent a necessary counterbalance to humanity’s errant greed and destructive predation; while conversely, even the tooth-grating mawkishness of the film’s upbeat ending is tempered somewhat by our knowledge that Old Georgie, that embodiment of humanity’s more rapacious instincts, always comes back round again in one form or another. The ending here is also the beginning, and new generations (the grandchildren to whom Zachry tells his nighttime yarn) will have their own stories to tell of eternally recurring rise and fall.

Inclined to bombast and overfamiliar generic posturing, none of the stories here amounts to much on its own – but taken together, they add up to a richer, more resonant experience, mediated through Alexander Bermer’s masterfully dizzy editing and choreographed to a multi-themed score by Tykwer, Reinhold Heil and Johnny Kilmek which, not unlike Frobisher’s own Cloud Atlas Sextet, modulates the emotional tone of this hexalogy through repetition and variation. While some may criticise Cloud Atlas for its moments of undeniable triteness, few could fault Germany’s most expensive film for its sweeping ambition and narrative boldness. It is a folly, perhaps, but also a marvel of adaptation, blithely happy, like Cavendish, to do away with any conventional “disdain for flashbacks and flashforwards and all such tricksy gimmicks” to tell its “tale of madness” with compelling method.

This entry was posted on March 16, 2013 by rantbit in Uncategorized and tagged Cloud Atlas, David Mitchell, S&S, Wachowski.