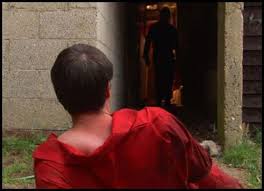 Waking confused in the middle of a field, Matt Sadler (Steve Garry) hitches a ride to his home in Shrewsbury. Unable to remember anything about where he has been or what he has done during a seven-day absence, Matt is duly dumped by his wife (Anna Ruben) who, grown weary of his regular blackouts, suspects adultery. Indeed, Matt has been sleeping with someone else – although his lover (Sarah Pemberton), who also has not seen him for a week, wants to end the affair. “I think you’re not built for infidelity,” she tells him. “I think maybe the guilt’s catching up with you. Maybe you should see someone – a doctor.”

The policeman (Angus Kennedy) who had questioned Matt had also recommended that this serial “missing person” see a doctor. And later, after Matt has retraced his steps to that backwoods field in which he had regained his consciousness, he will be told something similar by the gruff farmer Calham (Michael Dacre, equally menacing and pitiable): “I’m no expert, but sounds like you should see a doctor.” Which is to say that writer/director Leigh Dovey’s feature debut establishes itself as amnesiac mystery with a strong focus on the sort of guilt and secrecy that might require medical attention.

Meanwhile back on the farm, the dirty air of threat and constant hum of an electricity generator point to The Texas Chain Saw Massacre, the shocking (and shockingly early) death of a major character evokes Psycho, the barnyard depravities (tastefully, but also significantly, suggested rather than shown) come from ‘torture porn’, and the supernatural set-up is pure Pet Semetary (or Wake Wood, in fact made two years after Dovey’s film). Think of all this as akin to that uncanny feeling of “déjà vu” that strikes Matt from the moment he arrives at the farm. As Calham forces Matt to become an unwilling witness-slash-accomplice in unnatural atrocities that he is doomed never properly to remember, the two men become a decidedly odd countryside couple – not just cat and mouse, but also father and son, id and ego.

Amidst this range of clashing reference points and alternative realities, it is easy to become disoriented and forget where things started (and therefore what the film is really all about), so that we, along with Matt, keep losing track of the past no matter how often it tries to reassert itself. In this way, The Fallow Field, much like Joseph Ruben’s misunderstood The Forgotten, uses the more implausibly out-there aspects of genre both to realise and to cover a character’s deluded fugue from outside realities and traumatic family history.

The titular field is a place where actions can be severed from consequences, where illicit desires can be buried only to keep resurfacing in ever more warped forms, and where traumatic memories and dark fantasies are played out on repeat. Indeed, not unlike a horror movie, the field is a zone where the repressed always returns – and so, while the monsters, mutants and magic in The Fallow Field have already been ploughed to the point of barrenness by countless other films, here they become avatars of a sick mind working through the origins of its own arrested psychodrama. Which is to say that this field, for all its familiarity, has untold depths – and if it is full, both metaphorically and literally, with holes, they are there with good reason.

Perhaps unusually for a first-time filmmaker, Dovey is faithful enough in his viewers’ intelligence and knowledge of other, similar films not to spell everything out or wrap things up too neatly in clunky exposition. The result is a confidently creepy film – made even more so by Adam Ford and Rob Lord’s unnerving electronic soundtrack – where we are left to do our own digging for meaning. For the backstory here, however suppressed, will keep coming back to haunt you – making the The Fallow Field, for all its underground status, a genuine high point for ultra-low budget British horror. It may be an utterly crazy tale, full of unbelievable incident and implausible event, but turn it over in your mind a little and there is a harrowing subtext lying beneath its surface, just waiting to be unearthed.

This entry was posted on March 18, 2013 by rantbit in Uncategorized and tagged amnesia, Leigh Doveu, psychothriller, Texas Chain Saw Massacre, The Forgotten.