One of the most creepily charming horror films of the last decade. Somebody pick this title up now! Review originally published as part of Film4 FrightFest 2012 coverage for Little White Lies. 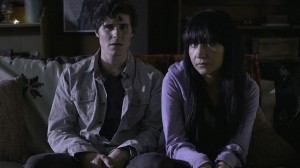 “If we don’t make it out of here,” says Mark (Marc Senter) in the prologue to A Night of Nightmares, talking straight to his own video camera, “I killed Phil in self-defense.”

“We were terrorised by spirits,” adds Ginger (Elissa Dowling), seated beside Mark on the sofa, “The dead owners Cliff and Ruth Tanner. Hopefully when you find our bodies we won’t be partially eaten.”

Although we do not yet know who Mark and Ginger (let alone Phil, Cliff and Ruth) are, there is something about the combination of this couple’s bizarre, ominous words and their strangely relaxed delivery that feels unhinged, crazy even – and crazy is exactly what, one way or another, director/co-writer Buddy Giovinazzo will deliver over one long, dark (and darkly funny) night of the soul.

Wind the clock back, and we discover that Mark Lighthouse is a geeky LA vlogger specialising in “alt high-risk undiscovered music”, and that Ginger is the latest obscure singer to be interviewed by him for his online show ‘Mind Mutations’. Ginger is really ‘out there’: not just because she lives in the middle of nowhere, in a desert cabin rented from old widower Cliff Tanner (who regularly calls Ginger’s cellphone with homely advice); but also because she is wackily eccentric.

Mark may reckon Ginger’s isolated cabin to be “very Chain Saw Massacre-y”, but persuaded by Ginger that the only nearby motel is a place where you “wouldn’t let Janet Leigh stay“, he agrees to spend the night in Ginger’s spare room. The two quickly hit it off, bantering like a couple in “a bad sit-com” – but things gradually, inexorably start going bump in the advancing night.

The “weird stuff” in New York that had led Ginger to flee to the California hinterlands re-emerges violently from the shadows in the menacing form of Phil (Jason London). Then, as Mark and Ginger wait for the police to arrive, an increasingly inexplicable scenario (despite Mark’s persistent attempts to rationalise) takes shape around and within the couple, haunted as they are by their own – and others’ – pasts.

Stating anything more about the plot would spoil the expert way in which Giovinazzo constantly wrongfoots viewers with one uncanny twist after another. For this is a sinuous, disorienting narrative that turns on a dime – or, more accurately, on a penny, like the ones that Cliff has over the years collected in a tin for small change. Suffice it to say that A Night of Nightmares is one of those modestly budgeted films that, like the recent works of Ti West, always keeps its (maybe) supernatural mechanics secondary to strong characterisation and nuanced dialogue.

Far from being a tiresome, shock-a-minute showcase of (rapidly dating) FX, this is an intimate, exploratory two-hander that builds slowly towards its freaky intrusions, along the way getting us fully on side with its amiably goofy leads (who are obviously made for each other). Meanwhile even the most innocuously casual-seeming lines (“Somebody is trying to fuck with us!”, etc.) come to resonate in unexpected ways.

The fact that Mark’s broadcasting surname Lighthouse is a pseudonym, that Ginger’s name too is an alias, and that they both share for dessert a resold cake inscribed to ‘Irving’, might seem like no more than incidental detail – but taken together they point to a fluidity of identity that will prove important thematically in a film where psychosis and metempsychosis make strange bedfellows. On top of all this, A Night of Nightmares is that rare thing, a horror movie with real charm, well earned by its two principals – yet just when you are smiling along at the development of Mark and Ginger’s weird romance, Giovinazzo throws a creepy curveball, and another penny drops…

A Night of Nightmares is indeed alt, high-risk, undiscovered – and well worth tracking down. One of the best films in this year’s Discovery Screen strand.

This entry was posted on April 2, 2013 by rantbit in Uncategorized and tagged Buddy Giovinazzo, Marc Senter, Texas Chainsaw Massacre.