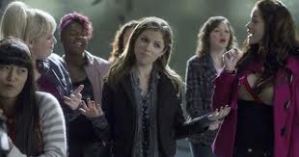 Synopsis: After their anxious leader Aubrey vomited on stage, the all-female Barden Bellas lose to all-male the Treblemakers in the International Championship of Collegiate A Cappella finals. The next year, Beca has reluctantly come to Barden University where her divorced father teaches, even though she would rather mash up tunes as a DJ. While singing in the shower, Beca is invited by Chloe to audition for the Bellas, and is soon joined by over-candid Fat Amy, over-sexed Stacie, whispering Lilly and several others. Meanwhile freshman Jesse gets into the Treblemakers, while his nerdy roommate Benji is unfairly rejected by lead singer Bumper. As Beca bonds with Jesse over The Breakfast Club, she clashes with traditionalist Aubrey over the Bellas’ old-fashioned repertoire.

When Aubrey blames the Bellas’ loss at the semi-finals on Beca’s improvisations, Beca quits and also walks out on Jesse – but the team that beat them is disqualified, opening a path to the finals for the Bellas. Beca makes up with Aubrey, and is invited to arrange the Bellas’ performance. Benji joins the Treblemakers after Bumper abandons them for a singing gig in LA. Beca’s mash-up of songs from different genres (including a song from the soundtrack to The Breakfast Club) wins the Bellas the champion title. Beca and Jesse kiss.

Review: It is hardly surprising that Mickey Rapkin’s 2008 book “Pitch Perfect: The Quest for Collegiate A Cappella Glory” should have been optioned immediately for adaptation to film (as the feature debut of Jason Moore, who directed Broadway’s Avenue Q). After all, its story harmonises neatly with a current vogue for talent contests (from television’s America’s Got Talent, American Idol and Glee to movies like the Fame remake and the StreetDance franchise), while also drawing on and updating the older, largely untapped tradition of acoustic singing (although TV’s The Sing-Off got there first).

This collision of old and new is embodied in Beca (Anna Kendrick), a Barden University fresher and wannabe DJ who is recruited into the campus’ all-female a cappella group the Bellas after being heard singing David Guetta’s Titanium (2011) in the shower, but who then finds herself forced by the group’s uptight leader Aubrey (Anna Camp) to stick to a stale songlist from the Eighties that practically guarantees failure at the annual intercollegiate championships. Like Beca laying down tracks on her computer or later arranging compositions for the Bellas, Pitch Perfect mashes up a lot of  routines which, though overfamiliar in themselves, are lent a certain novelty in the (re)mix. Just as different musical styles are made to mingle and merge, comedy is counterpointed by drama, and the loud, scattergun one-liners of Fat Amy (Rebel Wilson) offset the whispered, controlled insanities of her fellow singer Lilly (Hana Mae Lee)  – while competition commentators John (John Michael Higgins) and Gail (Elizabeth Banks) deliver a hilariously inappropriate Statler-and-Waldorf-style perspective from offstage.

There is also, as is the postmodern way, plenty of cake had and eaten too. Fat jokes, gay jokes, Jewish jokes, woman jokes, all as old-fangled and outmoded as a barbershop quartet, are reconstructed by a script from Kay Cannon (TV’s 30 Rock and New Girl) which, with sharp self-conscious irony, acknowledges and owns these gags for exactly what they are, without ultimately caring whether we are laughing with or at – just so long as we are laughing. If two of the Bellas are barely even noticed in the film, then their status as neglected personae mutae is embraced in their one line of dialogue (“really we’ve been here all this time”). Discussing films with Jesse (Skylar Astin), her suitor from all-male rival group the Treblemakers, Beca may complain that endings are always too predictable, but that does not stop Pitch Perfect itself from ending utterly predictably, with Beca’s musical innovations leading the underdog Bellas to victory, and with Beca and Jesse finally kissing in full accordance with rom-com expectation. In response to Beca’s avowed hatred of cinema, Jesse prescribes The Breakfast Club (“greatest ending to any movie ever!”) – and sure enough, the beats of both that film’s plot and its soundtrack find their way back into Pitch Perfect itself. For all the recycling and refashioning, it is still essentially the same old song – much perhaps as, no matter how you dress him, John remains, in Gail’s words, “a misogynist at heart”.

The songs themselves, however, performed by the cast without musical accompaniment (save for a disposable drinks cup used as percussion in Beca’s breathtaking audition for the Bellas), offer more straightforward pleasures.

This entry was posted on April 4, 2013 by rantbit in Uncategorized and tagged a cappella, Anna Kendrick, musical, S&S, The Breakfast Club.