My review for Film4. 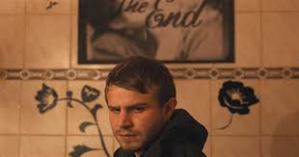 Review: “My thesis project was about peripheral vision. It dealt with something called crowding and size pooling. The width of one object is given a weighted average of the objects around it… It’s published, actually.”

Repeated several times with a hesitant modesty that looks increasingly rehearsed, these words contain within them a key metaphor for the effect of Simon Killer on the viewer. For just as Euro-tripping New York postgrad Simon (Bradley Corbet) might never stand out or be noticed but for the camera’s unrelenting focus on him, so too the film itself, when viewed by a casual eye, might seem just another breezy intercontinental romance or backpacking rites-of-passage indie. For Simon, set adrift by his recent breakup with a long-term girlfriend back home, goes on a formative journey of self-discovery in Paris, soon entangling himself with two very different, but equally short-sighted women from the City of Love: the myopic prostitute Victoria (Mati Diop) and the nystagmic literature student Marianne (Constance Rousseau).

Yet the truth, hinted in the film’s title, in the central casting of Corbet (Funny Games), and in the blankly uncompromising filmography of writer/director Antonio Campos (Buy It Now, Afterschool), is that Simon Killer is a close character study of disconnection verging on, and then beyond, sociopathy, as our craven antihero lies, cheats and manipulates – and worse – to get what he wants. At first Simon is shot from a cool distance, but once the camera starts fluidly tracking him (as he tracks others), all to the jungle rhythms of his personal stereo, there emerges a portrait of a pathological predator. His mother may nickname him ‘fox’, and he may prefer to see himself as a lion  – but most disturbing is how easily Simon passes for human, blending in unnoticed with the crowd.

This entry was posted on April 4, 2013 by rantbit in Uncategorized and tagged Afterschool, Antonio Campos, Bradley Corbet, Film4, sociopathy.