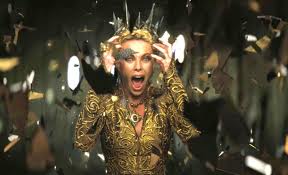 Synopsis: Shortly after young Snow White’s mother dies, Ravenna enchants Snow’s father King Magnus and murders him on their wedding night. Snow’s playmate Prince William and his father Duke Hammond escape the castle, but Snow is imprisoned, and Ravenna is joined by her brother Finn. Seven years later, in a land now poisoned by her reign, Ravenna magically absorbs maidens’ beauty to perpetuate her own, but her magic mirror reveals that only Snow has power either to destroy her or grant her immortality. Snow overcomes Finn and escapes through a sewer to the Dark Forest. Ravenna recruits Eric the huntsman to capture Snow, promising to bring his wife back to life – but realising this is a trick, Eric helps Snow get away. Getting past a troll, they spend the night in an all-female village, which Finn’s men then burn down. Snow and Eric follow eight dwarfs to a hidden elven forest, where Snow is blessed as the kingdom’s saviour by a forest spirit. Finn’s men attack, killing the dwarf Gus, but William joins Snow’s side, and Eric kills Finn. Disguised as William, Ravenna tricks Snow into eating a poisoned apple which sends the young woman into a death-like state that not even a kiss from William can lift – but back at Hammond’s stronghold, a kiss from distraught Eric raises her. Snow’s speech rouses all to attack Ravenna, and they charge up to the castle, while the dwarfs sneak through the sewers to open the gates. Ravenna conjures up an army of men from glass sherds who cut through Eric and William’s men. As Ravenna is about to pierce Snow’s heart, Snow stabs her from beneath. Snow is crowned Queen.

Review: In the opening sequence of Snow White and the Huntsman, an omniscient narrator reveals that the titular heroine “was admired throughout the kingdom as much for her defiant spirit as for her beauty.” The very fact that there is such a narrator takes viewers back to the story’s origins as a fairytale, perhaps best known in its 1812 German version published by the Brothers Grimm, and in cinema via Disney’s pioneering animated feature Snow White and the Seven Dwarfs (1937). Yet following fast upon Tarsem Singh’s high-camp Mirror Mirror (2012), this altogether more gothic feature debut from commercials director Rupert Sanders (and produced by former Walt Disney Studios chairman Joe Roth, who also recently refitted Alice in Wonderland) is again playing fast and loose with the canonic sources.

As ‘the fairest of them all’, of course Snow White should have beauty, but her possession of ‘defiant spirit’ marks a departure from the character’s customary passivity. Indeed, by the end the heroine, leading an army into battle on her charger and personally dispatching the wicked Queen Ravenna (a scene-stealing Charlize Theron), seems no less close to Joan of Arc than to the tradition. It is part of a retooling designed to bring together both male and female teens, much as Snow unites the ailing kindgom’s disparate communities (including, but not confined to, all-female ones). The calculated casting of emo icon Kristen Stewart practically guarantees interest from the Twilight crowd, as do the film’s occasional excursions into moody horror-lite, with Snow experiencing the Dark Forest as a spore-induced bad trip of wraiths and vampires. Further elements from the original story are also retained but changed enough to subvert expectation: the magic mirror takes on a liquid anthropoid form that only Ravenna appears to see; there are not seven but eight dwarfs (played by a rogues’ gallery of British actors); Ravenna adopts the magical guise not of an old crone, but of the dashing young Prince William (Sam Claflin); and when Snow succumbs to the apple’s poison, the Prince’s kiss fails to revive her. Meanwhile Ravenna, who takes beauty baths and feeds vampirically on local maidens to maintain her own youthful looks, seems to have been modeled on the Countess Báthory of legend – or perhaps on Sharon Stone’s aging villainess from Catwoman (2004).

Some influences on the film’s fabric introduce a sophisticated kind of wit through allusion’s backdoor. When Snow’s escort, the huntsman Eric (Chris Hemsworth), responds to a monster under a bridge by shouting “Troll!”, he evokes not just a long history of Nordic folklore but also the recent revisionism of André Øvredal’s Trollhunter (2010). When Snow encounters a divine stag walking on water in an idyllic enchanted forest, the ironic disingenuousness of the comment “No-one’s ever seen this before” from dwarf leader Beith (Ian McShane) will be recognised by anyone who has seen precisely this before in Princess Mononoke (1997). And while the climactic charge by Snow’s knights against a tide-bound castle is meant to be serious, the visual echo of the final scene from Monty Python and the Holy Grail (1975) is less so.

“You see, we’re not that different, are we?” Ravenna tells Snow – and if this clichéd line at first seems out of place, and Snow’s response to it (“I’m everything you’re not”) entirely appropriate, in fact the natural youth and beauty that separate Snow from Ravenna will be just as subject to the ravages of time. As Snow finally commits her first act of stabby murder (Ravenna’s preferred method) and casts a furtive glance at her own reflection in Ravenna’s mirror before acceding to the throne just vacated by Ravenna – and as the love triangle between Snow, William and Eric remains oddly unnresolved – we are left to wonder whether, despite the fairytale ending, they really will all live happily ever after. It is a brave and understated finish to a film which, along with Monster (2003) and Young Adult (2011), lets actress-cum-model Theron explore the contradictions and anxieties surrounding female body image. Not bad for a Tolkien-esque adventure as good-looking as it is spirited.

This entry was posted on April 4, 2013 by rantbit in Uncategorized and tagged Charlize Theron, fairytale, Kristen Stewart, S&S, Tarsem Singh.