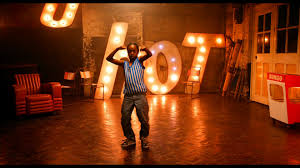 Synopsis: South London. Although he has been forbidden to dance by his parents (who want him to concentrate on passing the entrance exam for a private school), Jaden secretly organises a talent contest to save Gina’s youth community centre The Garage from closure. Jaden turns for help to scamming schoolmate Ethan who needs a dance crew of his own after his pursuit of Lucy has ended in a reckless challenge to her older boyfriend Kurt’s semi-professional streetdance outfit. The two boys recruit Ethan’s karate-obsessed neighbour Amy, overweight remix artist Brian, and posh ballroom-dancing siblings Rebecca and Tim. After some teething troubles, Jaden devises a way to incorporate the crew members’ different strengths.

Gina’s attempt to persuade the council to keep The Garage open is ruined when Kurt provokes Ethan into a fight outside the meeting. Both Ethan and Jaden quit the crew, but return in time for the talent contest, winning against Cybernetic, and winning over not just Jaden’s parents, but also a key council member. Ethan and Amy become a couple, and the eviction notice for The Garage is torn up.

Review: “Let’s put on a show!” is a trope that can be traced from Babes in Arms (1939) through The Blues Brothers (1980) and Honey (2003) to The Muppets (2011). So when the school children in Ben Gregor’s All Stars attempt to rescue their local youth centre with a talent contest, they are dancing to a familiar tune, while their chosen competitive medium also taps into a recent rash of dance-based films, from the US’s Step Up (2006) and sequels through to the UK’s own phenomenally successful StreetDance 3D (2010) and Streetdance 2 (2012), of which All Stars is a spin-off (its working title was StreetDance Jrs.). If first-time feature director Gregor comes from the small screen, so do the idioms of his film’s dance-off format, currently to be seen in television programmes like Got To Dance (of which Akai Osei, who here plays Jaden, was the first winner in 2010) and Strictly Come Dancing (whose runner-up from last year Kimberley Walsh here plays another character’s mother). There is even, in all the school-set shenanigans, quite a bit of TV’s Grange Hill – and when an older dance rival describes young protagonist Ethan (Theo Stevenson, Horrid Henry The Movie) and his friends as “Glee-Beebies” (a punning blend of television’s comedy musical series Glee and the BBC’s pre-school network CBeebies), screenwriter Paul Gerstenberger, himself with an extensive background in television, is openly acknowledging this film’s cultural influences.

Yet if viewers will be familiar with its routines, All Stars still finds ways to keep the individual steps diverting, showcasing a broad range of dancing talent, while mixing children’s entertainment with a degree of social realism. With an early sequence that expressly contrasts Ethan’s ‘Dream’ – in which he is met at school by a sunny, choreographed fanfare from the pupils – and his ‘Reality’ – in which his late arrival is marked only by drizzle, and noticed only by an angry teacher – All Stars establishes dance as an escape from grimmer realities. Accordingly, when Jaden is faced with the pressures of an entrance exam for which he has not studied, he imagines himself dancing off against paper samurai in an origami world; while Ethan’s neighbour Amy (Fleur Houdijk), faced with a depressed and withdrawn father at home, fantasises a charming black-and-white tap-dancing duet with her re-energised dad. These bursts of fantasy show off the film’s 3D to best effect, and admit an inventive variety of saltatory styles to the film, much as Jaden’s crew, though nominally a streetdance outfit, additionally incorporates Amy’s martial arts moves and the ballroom poise of ‘posh’ public school siblings Tim (Dominic Herman-Day) and Rebecca (Amelia Clarkson) – yet the fantasy sequences also slyly suggest an ongoing disjunction between dreams and reality, so that the ultimate on-stage triumph of these school children, saving The Garage, their families and their community, is framed as precisely what it is: genre-bound wish fulfilment in a sociopolitical environment of failing schools, broken homes, council closures and bulldozing recession.

So despite its hackneyed storyline, broader than broad characterisation and utterly predictable ending (all of which are of course likely to appeal to its target pre-teen viewership), All Stars takes contemporary British realities as its partner, and occasionally even lets them lead its merry dance.

This entry was posted on May 13, 2013 by rantbit in Uncategorized and tagged dance, musical, S&S.