Review first appeared in Sight & Sound, May 2013 (in a shorter version) 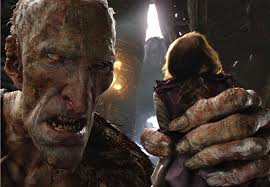 Synopsis: Cloister, Albion. The boy Jack was reared on bedtime stories of man-eating giants banished to the aerial kingdom of Gantua by old King Erik’s magic crown, which gives its holder power over the monsters. Ten years later, power-hungry Roderick has secretly unearthed both the crown and the magic beans that create a gateway between Gantua and Earth – but a monk steals the beans and hands them to Jack. Unhappily betrothed to Roderick by King Brahmwell, adventurous Princess Isabelle seeks shelter from rain at Jack’s farmhouse, only to be swept into the sky by a towering beanstalk sprouted from a moistened seed.

Jack and Roderick join loyal knight Elmont’s rescue party. On Gantua, Roderick seizes all but one of the remaining beans from Jack. All except Jack are captured by the giants, but Roderick takes command of the giants with the crown and announces his intention to lead them against Albion. Jack frees Isabelle and Elmont, and Elmont fights and kills Roderick. The three only just make it down the beanstalk as it is uprooted by Brahmwell’s men below – but two-headed giant Fallon, wearing the crown as a ring, leads his giant army to earth down beanstalks sprouted from Roderick’s beans. The giants besiege Cloister, but Jack throws the last bean (fatally) into Fallon’s mouth, stops the giants’ onslaught with the crown, and marries Isabelle.

London, present day. The crown, on display in the Tower of London, is eyed by a schoolboy who resembles Roderick.

Review: Arguably Shrek (2001) set the ball rolling with its anything-goes pastiche of familiar fairytale motifs, and a few subsequent live-action features – notably Terry Gilliam’s The Brothers Grimm (2005) and Tommy Wirkola’s Hansel and Gretel: Witch Hunters (2013) – have retained the unjolly green giant’s wildly postmodern way with classic bedtime stories. Yet other recent revisions of children’s stories, be it the recycled contes of Red Riding Hood (2011), Mirror, Mirror (2012) and Snow White and the Huntsman (2012), or the updated treatments of local folklore in Norwegian films Trollhunter (2010) and Aleksander Nordaas’ Thale (2012), have focused less on deconstructive play than on telling old stories in newer idioms (and in the newer visual modes made possible by CGI). Bryan Singer’s Jack The Giant Slayer too, though co-written by Darren Lemke (who helped pen 2010’s Shrek Forever After), and though referencing, through a cameo from a ginger cat, the 2011 Shrek spin-off Puss In Boots (which also ploughed the beanstalk plot), never quite goes full Shrek.

This is not for want of intertextuality. The modest house of farmboy Jack (Nicholas Hoult) is swept up into the air as though the sprouting beanstalk were the tornado from The Wizard of Oz (1939); in his self-serving motivations, his giant-exploiting plot, and his willingness to abandon the princess to whom he is betrothed, Stanley Tucci’s villain Roderick is plainly modeled on Prince Humperdinck from The Princess Bride (1987);  the cliffs and waterfalls of the giants’ land Gantua evoke the verticality of the floating islands from Avatar (2009); and having Ewen McGregor’s knight Elmont say “I’m getting an awfully bad feeling about this” suggests that perhaps the galaxy of the Star Wars prequel trilogy (in which McGregor’s Jedi knight Kenobi repeatedly uttered a similar line) may not after all be so very ‘far, far away’ from the fictional hamlet of Cloister in medieval Albion. Yet all these allusions to pre-existing silver-screen adventures serve less to mark Jack The Giant Slayer as a postmodern exercise in mix and match than to place it in a tradition of old-fashioned matinee entertainment – which is exactly what Singer’s fairytale delivers.

There may be towering plants and outsized savages, but the film’s ambitions are decidedly modest, apart from the vividly spectacular presentation of its mo-capped monsters engaged in climactic gigantomachy. Princess Isabelle (Eleanor Tomlinson) may at first seem a new kind of fairytale heroine, indepedent of spirit and champing at the bit to escape the constraints place upon her by the over-protective patriarchy of widowed King Brahmwell (Ian McShane), but it is not long before she has reverted to archetypal woman-in-peril. Meanwhile, the beanstalk itself becomes a symbol not only of growing up, but also of social elevation, as 18-year-old Jack rises above his commoner’s roots to pursue a Princess’ hand  – but a contemporary coda makes it clear that even in the twenty-first century, our blue-blooded royals remain encased just beyond the reach of ordinary boys. Fictive giants are brought down, but the real status quo is left intact.

This entry was posted on May 13, 2013 by rantbit in Uncategorized and tagged beanstalk, fairytale, giant, S&S.