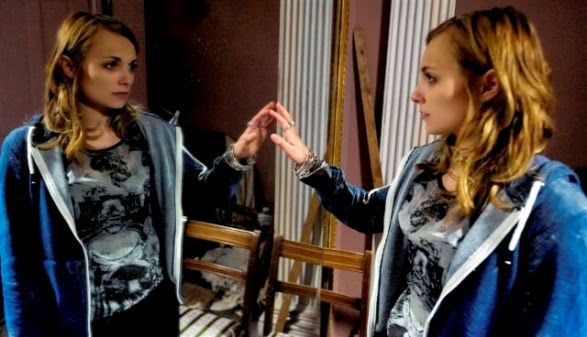 The most prominent feature in Brighton is a ghost. The West Pier, once a symbol of Victorian grandeur, is now inaccessible, burnt out and neglected, a skeletal shadow of the past – although the current construction of the i360 observation tower on the site offers promise of restoration, modernisation and perhaps a new future, built on the wreckage of history.

The ghostly persistence of the past in the present is a theme that also dominates John Shackleton’s Brighton-set feature debut The Sleeping Room, which begins near its end, with its heroine Blue (Leila Mimmack) lying supine and foetal on the beach, clutching a belly riddled with stab wounds, and seeming no less a futureless ruin than the Pier itself nearby. Flash back to a few days earlier, and Blue is an orphaned young woman with a tragic background, on the game in England’s South while searching for some sort of connection to her late mother’s history. Adopted by local madame Cynthia (Julie Graham) and controlling, violent pimp Freddie (David Sibley), Blue is drawn to a call-out job at The Pells, a one-time brothel that is now the temporary residence of Bill (Joseph Beattie), who has come from London to restore an upper floor of the building.

The apartments still retain two-way mirrors, a concealed ‘sleeping room’ for the establishment’s girls, and an old penny-operated Mutoscope – as well as some of the reels that its notorious Victorian owner Fiskin filmed and screened for his special customers. As Blue’s relationship with Bill deepens in spite of Freddie’s express threats and warnings, she uncovers at the Pells a long legacy of exploitation and abuse that leads all the way to herself and her own situation – and an undiscovered crime that still echoes down the ages. Here horrific deeds of the past seem to be stuck in a repeat loop – like the flickering reels of the Mutoscope – and with everyone replaying roles from a bygone but still influential era, only Blue’s junkie friend Glenny (Chris Weller), with his combi van and lack of personal attachment to Brighton, appears to offer a way out.

A gothic ghost tale served with a slice of contemporary social realism, The Sleeping Room, like Byzantium (2012) before it, steals the south-coast setting of Paul Andrew Williams’ London to Brighton while dressing Williams’ themes – prostitution, paedophilia, runaways – in the tropes of genre. Which is no less than what Fiskin did in his home movies, turning cold-blooded murder into a costumed Victorian peepshow. Once the possessions and ghostly manifestations have fully kicked in, it all becomes a little Punch and Judy – which is perhaps in keeping with the seaside setting – but The Sleeping Room works best as an incestuous love letter to Brighton and the town’s darker, ever-present history. Also watch out for the mute cameo from local horror critic Billy Chainsaw as the imposing downstairs neighbour.