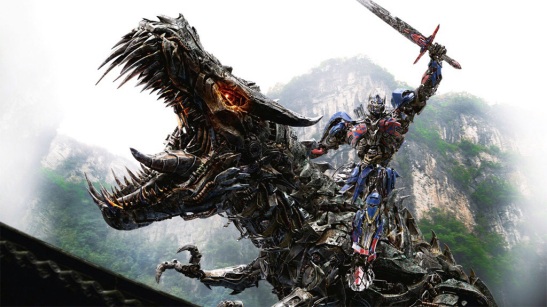 Five years after the Battle of Chicago. Traces of the alien metal, now dubbed ‘Transformium’, are being used by inventor Joshua Joyce and his multinational KSI to create new weapons, upgraded from parts of Decepticons and Autobots alike. These have been captured by Harold Attinger’s covert CIA unit Cemetery Wind, with help from a spaceship-flying Transformer called Lockdown who is willing to provide a Transformium-producing Seed in exchange for Autobot leader Optimus Prime, whom the Transformers’ Creators want to subjugate.

An old rustbucket salvaged by Texan widower and inventor Cade Yeager turns out to be the injured Optimus. Cade, his teen daughter Tessa, her boyfriend Shane and Optimus escape Cemetery Wind, rejoin four other fugitive Autobots and infiltrate KSI’s city headquarters. Joshua unleashes his synthetic Transformer Galvatron, not realising it has been infected with the brain of Decepticon leader Megatron. In the ensuing fight, Lockdown captures Optimus and Tessa, taking both to his spaceship. Cade, Shane and the Autobots rescue them, as well as some captive Dinobots.

Harold and Joshua move the Seed to their Beijing offices. As Galvatron turns Joshua’s transformers into a Decepticon army, Cade, Shane, Tessa and the Autobots, flee to Hong Kong with Joshua. In a pitched battle, Optimus tames and rides the Dinobots, killing Harold and Lockdown. Optimus flies into space to face the Creators.

Review: “Sequels and remakes, a bunch of crap”, complains the old-timer who is dissolving his beautiful film theatre after ’79 great years’, and expressly blames films just like Transformers: Age of Extinction (which is both a sequel and a cinematic reimagining of Hasbro’s line of toys) for the demise of his business. The speaker knows that he has become a dinosaur – and in fact Michael Bay’s latest opus opens with the extinction of the ‘actual’ (though entirely virtual, and 3D) dinosaurs via a transformative alien ‘Seed’ ripped straight out of Ridley Scott’s Prometheus (2012), and then skips ahead to show new, twenty-first-century threats of extinction – not just to life as we know it, but to ‘homespun’ pre-millennial values, and to cinema itself.

Inventor and widowed father Cade Yeager (Mark Wahlberg) is an old-fashioned kind of guy with a nostalgist’s eye for redundant technology, who nonetheless takes the detritus of ages past – like the theatre’s old projector or the bullet-riddled rustbucket of a truck mysteriously parked in its auditorium – and tries to refashion it into something new and useful, or at least strip them down for saleable assets. Significantly, none of his inventions actually works, and he cannot pay the bills.

If Michael Bay’s original trilogy – Transformers (2007), Transformers: Revenge of the Fallen (2009), Transformers: Dark of the Moon (2011) – replayed lines (“Let’s roll”) and motifs (urban terror, desert warfare, torture, external rendition) from Bush’s War on Terror as a little boy’s – or a reactionary manchild’s – gung-ho sandpit fantasy, then Transformers: Age of Extinction is something of a reboot, and (maybe) a rethink. Following the widescale destruction of Chicago at the end of the third film, we are now in a very new era, where humankind’s former allies the Autobots have been forced into hiding along with the Satanic Decepticons, and a secretive government agent Harold Altinger (Kelsey Grammer) is working with robotic extra-terrestrial Lockdown to rid the world of Transformers forever while harnessing their technology for new weapons. There is now an entirely new cast of human characters, coming from a rather different, rural working class socioeconomic bracket to mark America’s shift into recession – although when Cade resparks the engines of Autobot leader Optimus Prime (voiced as ever by Peter Cullen), he might just have found an unorthodox way, via intercontinental dashes and interplanetary skirmishes, to see his daughter Tessa (Nicola Peltz) through college after all.

The landscape of this film is still littered with the iconography of the post-9/11 dispensation: the identities of wanted Decepticons are displayed on soldiers’ playing cards, a so-called enemy (Transformer) combatant is interned and repeatedly electrocuted, and Altinger deploys a Bushian “with us or against us” line. Yet Ehren Kruger’s script has lost the blind chauvinism of the first three films (the last two of which he penned himself). Here the wrong targets are wilfully Gitmo-ised, here deadly Black Ops are conducted in the name of freedom for corrupt, self-serving motives, here deals are secretly made with the devil. And here, the usually Christ-like Optimus announces that he will break his golden rule of never harming a human – and duly does so – making him a more morally nuanced character along with the humans whom he no longer defends without question.

Overall, this is an improvement on what has preceded, with more shading to its politics, more easily distinguished robots, and more varied set pieces (including a spaceship interior and a vertigo-inducing cable walk high above a cityscape). Still, we are talking baby steps, in a franchise that remains big, dumb nonsense. Hardly the subtlest of directors, Bay handles the film’s climactic Hong Kong sequences with all the racial sensitivity of a bull in a China shop, and reduces the seventeen-year-old Tess all at once to barely legal sex object (Age of Consent might have been a better title), damsel in need of rescue, and item of property handed down from patriarchal father to older boyfriend (Jack Raynor) – a pattern already familiar from Bay’s Armageddon (1998). Like the outmoded Autobots who must face up to their own version 2.0s in the film, or like the resurrected Dino-bots that help them, Bay is a dinosaur-like throwback to the Eighties trying to save a post-millennial cinema that he no longer understands – or perhaps understands too well – with his outsized spectacles, lumbering effects and small-brained narrative. Still, perhaps some Cretaceous era values are better left buried.

This entry was posted on September 12, 2014 by rantbit in Uncategorized and tagged Dino-Bots, dinosaurs, Mark Wahlberg, Michael Bay, S&S, Transformers.