The Sundance Film Festival, America’s mecca of indie cinema, was never so-called for taking place in sunny times. On the contrary, January in Utah is the season of extreme cold and much snow, and Park City at that time attracts skiers as much as cine-hipsters. Rather, Sundance ultimately takes its name from one of the best known on-screen rôles by festival godfather Robert Redford. Still, the name of festival’s transatlantic counterpart Raindance is an example of dry British humour about wet weather, in resigned recognition of the precipitation that tends to characterise the English autumn in which the festival takes place. Yet it needn’t all be grim, damp and cold – for even as the sun sets on the British summer, this year’s Raindance features a showcase of films from the Land of the Rising Sun, with special emphasis on filmmakers in the springtime of their careers.

Actually, several of these Japanese films are rather bleak, and some are cold and rainy too. The sunniest, both literally and metaphorically, is Fujita Yosuke’s Fuku-chan of FukuFuku Flats (2014), even if the male characters here, as in the director’s earlier Fine, Totally Fine (2008), sport some of the most spectacularly unfashionable sweaters ever seen, perfectly matching their nerdy dispositions. Caring and generous to a fault, thirtysomething title character Fukuda (Oshima Miyuki) mediates squabbles between the other men in his building-site workplace, befriends fellow male loners in his working-class apartment block, and generally stands up for underdogs. Yet he is also something of an arrested man child, flying home-made kites, drawing manga-style sketches – and his irrational fear of women is brought into focus by would-be photographer and karma casualty Chiho (Mizukawa Asami), who reemerges to make amends for a cruel, life-changing playground prank she played on Fuku-chan decades earlier. 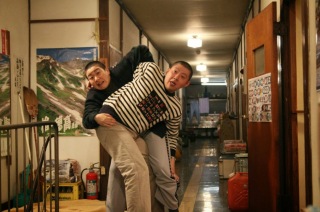 Tubby, geeky, proletarian Fukuda turns out to be an unusual subject both for Chiho’s photography and for cinema. The underlying message, and the artistic manifesto for the film, is that the more you look closely at things or people, the more you see their beauty – although unfortunately that message is delivered most explicitly by womanising photography guru Numakura, who boasts that he once stared at human sick for five hours straight (“someone who can find God in vomit is an artist”). The implicit equation of Fukuda with human waste hints uncomfortably, for all Fujita’s good intentions, at the film’s rather patronising position on its protagonist. It doesn’t help that the spew-scrutinising Numakura is such a ridiculously broad character, completely out of keeping with the film’s otherwise low-key observational humour. Another key message – the need for Buddhist-like balance in life – is brought by yet another ludicrous figure, a crazy, sword-wielding waiter who violently refuses to serve the water that would offset a curry’s fire. The substance of the scene is important, but the tone is utterly misjudged, seeming to belong to a different film altogether.

That said, Fuku-chan of FukuFuku Flats largely remains a sweet, amiable affair – a gentle portrait of a gentle man wrapped vaguely in the guise of romantic comedy. It also has a peculiar take on gender. Much is made of how Fukuda is “hung like a horse” and “actually is very masculine”, while Numakura’s Cronenberg-esque camera and Fukuda’s elongated potato – both presented as gifts to Chiho – come with a decidedly penile appearance. This focus on the phallus brings into relief the strange decision to cast comedienne Oshima as main man Fukuda – but her brilliance in the role, anchoring the entire film, helps to reinforce the idea that Fukuda represents a different kind of cinematic hero, and a different model of masculinity.

The Lust of Angels (2013) offers a rather different challenge to gendered stereotypes. Following Isogai Nagisa’s film-school short My Baby (2010), this near-feature-length piece from the young writer/director plays upon our assumptions about abuse and victimhood, hiding its sharp-edged point in much the same way that one of its characters, Yuriko, conceals a razor. It begins with a high-angle tracking shot over an actual railway track, to the accompaniment of Sumida Shinya’s giallo-esque score. On board the packed Hanagawa Line, notorious for gropers, a middle-aged male stranger sidles up to schoolgirl Saori and begins touching her up from behind, causing the girl to smile ever so slightly – until, that is, Yuriko intervenes with her blade, splashing Saori’s arm with blood from the salaryman’s hand. Abuse, empowerment and first blood will become recurrent motifs as new girl Yuriko, who killed her own stepfather during an attempted sexual assault, recruits fellow high-schoolers Saori, Tomoyo and Hiromi to join her in entrapping gropers and enacting a kind of feminist vendetta against male harrassment.

What might sound like an underage variant on rape-revenge is greatly problematised by the abiding suggestion that all this sexual abuse by men comes with female complicity, even instigation. So incendiary is this material, where it is women who keep asking for what they or other women get, that, were Isogai herself a man, it would probably be deemed straightforwardly misogynist. Instead we are left with Yuriko’s horrified perspective, unable ever to trust men and driven to utter despair by the conduct of her sisters. That train track becomes a faultline, not just between but within the sexes, in a film from which nobody, male or female, emerges looking good.

Kamono, the young protagonist of Takaya Kosuke’s comic half-hour debut Buy Bling, Get One Free! (2013), is a preening would-be trend-setter, so obsessed with superficial appearance that when we first meet him, his insistence on repeatedly checking his hair and adjusting his uniform in a truck’s side mirror interferes with his ability to carry out his job directing traffic at a wintry construction site. At first Takaya’s satire focuses on the absurd monomania of Kamono’s narcissism, making easy sport of this young man’s bizarre metrosexual wardrobe and shallow consumerist values – but then, as Kamono, spotted, snapped and discovered, suddenly becomes the cover boy on a magazine and the model for a shadowy couture house, the film shifts its surreal attentions to all the objectification, exploitation and outright inanity of the style industry itself, built on insecurity, idol worship and hidden slave labour. As Kamono’s dreams of celebrity turn out to be a hilarious nightmare, Buy Bling, Get One Free! reveals the true meaning of the phrase fashion victim – and for all its craziness, it is actually far more unforgivingly mordant than, say, The Devil Wears Prada (2006).

Perhaps closer to the Raindance spirit is Hamaguchi Ryusuke’s Touching The Skin Of Eeriness (2013), a drizzle-soaked riverside mystery which, at its end, promises ‘Floods’ – although whether those will be an actual or metaphorical sequel to its enigmatic events is anyone’s guess. If Touching The Skin Of Eeriness is organised around scenes of schoolboys Chihiro and Naoya practising a shirtless dance duet in which they never quite make physical contact, then likewise the film’s sequences, characters and themes circle asymptotically with only invisible connections to hold them suggestively together.

After the death of his parents, Chihiro (played by Sometani Shota, star of Sono Sion’s Himizu) has moved in with his big brother Togo and Togo’s girlfriend Satomi, disrupting the older couple’s intimacy. Hajima, who works with Togo clearing rubbish from the local river, speaks ominously of finding their ‘next victim’ for a ‘flash flood’. Naoya is told, without explanation, by his girlfriend Azusa that she wants more space. Weaving these narratives together is an archaic African fish, the ‘meat-eating biter’ Polypterus endlicheri, which recurs as a reality, a toy icon and an analogy, leaving its irrational imprint in several characters’ flesh. Meanwhile Chihiro and Naoya, confused by their teacher’s over-abstract instructions, must work out who in their dance is the fish, and who is the water. Obscure and elliptical, and full of doom-laden forebodings of death and apocalyptic deluge, Touching The Skin Of Eeriness leaves it to the viewer to probe the narrative’s vulnerable points and link its episodes into something coherent and meaningful – and ends with a murder case where guilt becomes lost in a strange choreography of transference, projection and substitution. It will – quietly and unassumingly – haunt you for days.

By an odd coincidence, my other favourite film from Raindance’s Japanese selection, Watanabe Hirobumi’s debut And The Mud Ship Sails Away (2013), also prominently features a primitive fish in its symbology: the freshwater ‘living fossil’ Pirarucu to which protagonist Takashi (Shibukawa Kiyahiko) is expressly compared. 36 going on 40, but essentially a big, arrested kid, Takashi lives with his ancient grandmother (Hirayomi Misao) in the east of rural Tochigi Prefecture (also the provenance of Watanabe). Obdurately unemployed, bitterly divorced and completely estranged from his five-year-old daughter, Takashi divides his time between watching TV, playing pachinko, and sleeping. Everybody, even Takashi’s best friend Shohei (Iida Kaoru), can see that he is an idle bum and a loser, but Takashi seems unable, or at least unwilling, to shake himself from his stasis, even turning down easy if potentially dangerous work as a drug mule.

The catalyst for change arrives in the opening scene. Teenaged Yuka (Takahashi Ayasa), the half sister Takashi never knew existed, comes on a train from Tokyo, dragging a suitcase behind her, past a foreboding sign that reads, “Say no to substance abuse!”. She is in search of her own (and Takashi’s) father, in fact long deceased, and soon becomes something of a fixture in Tochigi. As shy of school as Takashi is of work, but also more curious and worldly wise, Yuka keeps pushing her half brother to break his feckless, tedious routine and show her a good time – until Takashi, described by Shohei as being “on another planet”, finally has an alienating, transformative experience abroad.

Not only are the plot and characters here broadly reminiscent of Stranger Than Paradise (1984), Jim Jarmusch’s study in self-satisfied boredom and inertia, but that film’s look and texture are also specifically evoked by cinematographer Bang Woo-hyun’s wide compositions in black and white, by composer Watanabe Yuji’s string stings and even by Takashi’s choice of hipster hat. Fortunately writer/director Watanabe also pulls off the considerable feat of capturing Jarmusch’s deadpan humour, while transplanting it from mid-Eighties New York to inland Japan in the wake of Fukushima Daiichi disaster. Still, an anti-nuclear protest – the film’s sole sequence in colour – only enters Takashi’s closed, monochrome consciousness via the TV set, as he otherwise insulates his politically apathetic self from any broader reality (and gruffly shuts the door on a persistent fundraiser). Takashi’s final, addled venture into the outside world – also an imaginative departure from the Jarmusch model – is a lo-fi, lysergically fun freakout, while providing ironic confirmation of Takashi’s long held suspicions that it is perhaps better after all just to stay at home. He does, though, return changed beyond all recognition, a new god in his old neighbourhood.

It would be an overstatement to suggest that And the Mud Ship Sails Away will have a similarly galvanising effect on the viewer – for it is far too laid back to inspire much more than wry smiles and warm glows. Yet, made for under £3000, it is an excellent example of the bone-dry drollery that can result from a finely honed screenplay, a pitch-perfect cast and a highly dedicated crew. As a calling card, it shows Watanabe to be a real talent to watch – come rain or shine.