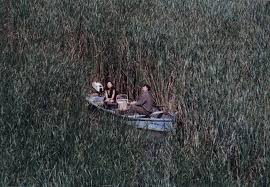 On a misty lake, a woman (Suh Jung) is caretaker for a fleet of houseboats, silently providing the men who hire them with fishing tackle and occasional sexual services. Drawn to a mysterious new arrival (Kim Yoo-Suk) who seems less interested in fishing or sex than in isolation itself, she interrupts his attempt to shoot himself, and soon a strange, wordless relationship develops between them. At first she spurns his sexual advances and arranges for a prostitute to visit him, but when, panicked by the arrival of police investigators at the lake, he attempts suicide again, the caretaker tends his horrific wounds and nurses him with sex – and both find themselves hooked on an intense passion which leads to jealousy, violence, mutilation and murder.

With films like Crocodile, Wild Animals, Birdcage Inn, Bad Guy and Spring, Summer, Autumn, Winter…and Spring, South Korean writer/director Kim Ki-Duk has earned himself a reputation for his uncompromising studies of marginalised characters and extreme experiences. This reputation can only be strengthened by The Isle (Seom), a film which, like Takashi Miike’s Audition, graphically deploys all the brutal imagery of fishing to illustrate an obsessive relationship between damaged people. If you are squeamish at the thought of fishhooks being dragged through a man’s throat or a woman’s vagina, then you are likely to find The Isle very difficult to sit through – although it is the scenes in which a fish, after having sushi slices cut from its side, is returned still living to the water, which have fallen foul of the British censors, even if this is a central metaphor for a film so concerned with characters given a chance to recover from their painful scars.

These scenes of raw shock, however, are few in number and carefully integrated into a film which is staggering in its poetic beauty. Kim allows his story to unfold with almost no dialogue (and indeed the caretaker, though not strictly mute, is not heard to utter a single word in The Isle), instead eliciting extraordinarily nuanced gestures from his performers, and transforming the landscape itself into a richly visual character in its own right whose changing features reflect the shifting psychology of the protagonists. This confusion of setting and character is consummated in the film’s hauntingly irrational sequence of final images, reminiscent of Tarkovsky at his most evocative.

If you have a strong stomach, then this deceptively calm tale of self-imposed isolation, extreme emotions and fishing will quickly reel you in, and leave its hooks in you long after you escape the cinema.

This entry was posted on January 31, 2015 by rantbit in Uncategorized and tagged Kim Ki-duk, Movie Gazette.