Star Ratings: Just The Tip of the Critical Iceberg 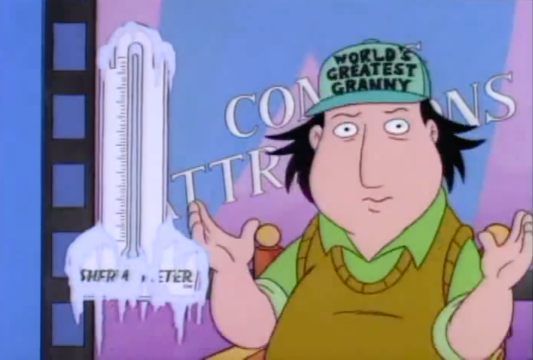 “Anyway, to get to the part of the show you like best, and I find humiliating: on the Shermometer, this film rates an absolute zero. Brrr.”

In the very first episode of ABC’s animated TV series The Critic, schlubby network film reviewer Jay Sherman articulates a fundamental truth about his chosen art: the element of film criticism that many viewers favour most, and to which they will often skip, is also the part that most – although certainly not all – critics deem the least important of what they do. Whether it is presented as a number of stars, a percentage, tomatoes of relative ripeness, significantly directed thumbs, or even as a reading on the ‘Shermometer’, the evaluative summary is a convenient, easily digestible guide to how much the individual critic (or sometimes her publication) liked a film. Distributors and film PRs love them, because star ratings are an easy hook when you have a product to sell, even if they have become so overused in film advertising as to have lost all real value. Critics, however, are not in the business of selling films, but rather of lending considered advocacy to what they esteem.

Film critics encapsulate their viewing experience in words, while also – crucially – bringing to bear their relevant knowledge of culture, history, ideology, the filmmaking process, other films and even some of their own personality. It is an inevitably reductive process, but when done well it is also a distillation, conveying the very quintessence of a film through a mixture of analysis, interpretation, contextualisation and, yes, evaluation. The star rating, however, merely reduces further the evaluative aspect of criticism while utterly overlooking everything else. Even if it happens to be the most visible part of the average review, appearing prominently on the page or – if positive – extracted (often without any accompanying words) for the marquee, the star rating is like the tip of an iceberg, concealing the full shape and texture of what underlies and supports it. It is, in short, a treacherous misrepresentation of criticism, whose purpose is to offer reflective insight into a film, rather than merely to give consumer advice presented in ‘tl; dr’ form.

I know what you’re thinking. Of course those pesky critics, narcissists one and all, want you to read their every ‘pretentious’, meandering thought, and hate the idea that you should just cut to the critical chase. Yet even if you couldn’t care less about the finer points of criticism, and only want to know whether you should spend your good money on the film in question, in fact the very best index of what is likely to appeal to you is an objective assessment of the film’s makeup: its genre, its antecedents and influences, its look and style, its cast, and so on. This is because of course the very same elements that lead me to grant a film 1 star (I don’t like musicals, Russell Crowe makes my skin crawl, etc.) might make it a potential 5 for you – and you cannot simply intuit those elements from the star rating itself, which is after all merely a crude condensation of the review’s most subjective portions.

What is more, star ratings are probably subjected to more outside interference than any other part of a review. Editors change them, even PRs change them, so that you can never be sure if the star rating that you read is the same as the one that the critic originally awarded. If you really want to know the critic’s opinion, not to mention the facts, about a film, best to read the review instead.

This entry was posted on March 16, 2015 by rantbit in Uncategorized and tagged evaluation, film criticism, Grolsch FilmWorks, star ratings.