Guest review from Antonia Bettis; first appeared in Sight & Sound, May 2013 (in a much shorter version) 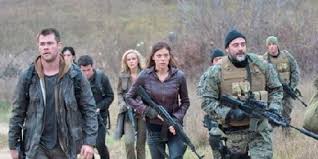 Synopsis: Spokane, Washington State. As North Korean soldiers parachute in at dawn and occupy the town, Marine-on-leave Jed Eckert and his younger brother Matt escape to their cabin in the woods with Robert, Toni, the Mayor’s son Daryl, Pete and a handful of other highschool seniors. Betrayed by Pete, the group sees the Eckert boys’ policeman father Tom executed by North Koreans’ local leader Captain Cho for encouraging them (through a megaphone) to “go to war”. Jed moves the others to a new hideout in an abandoned mine, and transforms them into a mobile guerrilla unit, named Wolverines after the highschool football team, and takes the fight to town.

As an attempt to blow up Cho and some dignitaries is foiled by a Russian counter-insurgency expert, Matt breaks ranks to rescue his girlfriend Erica from captivity, causing one Wolverine death and friction with Jed. After the North Koreans bomb the mine and the surrounding area, the surviving Wolverines flee further into the woods, where they are joined by three adult soldiers from the Free American Army who recruit them for a mission to steal a strategically crucial communications box from North Korean headquarters in Spokane’s former police station. The mission succeeds, with Jed using his father’s handgun to kill Cho, but as the North Koreans track the Wolverines to their safe house via a trace secretly implanted in Daryl’s flesh, Jed is himself killed. Matt decides to continue the insurgency, taking over from his late brother as inspirational fighter and leader.

Review: “North Korea – it doesn’t make any sense,” complains Matt Eckert (Josh Peck), star quarterback on local high school football team Wolverines, as his American hometown is invaded by the massed forces of Kim Jong-un. Matt’s big brother Jed (Chris Hemsworth) agrees, insisting there must be a “bigger picture” – and that, it will turn out, is support from the Russians, sore at the West after tensions over Georgia. Still, although North Korea has recently been sabre-rattling about pre-emptive nuclear strikes against the US (quite possibly in part as a response to this remake), few actually believe that North Korea could launch a successful land invasion of America’s Pacific North West, even if it were (yet more implausibly) in close alliance with a Russia that had taken the Eastern seaboard.

Russia also played aggressor in the original Red Dawn (1984), when it really did make sense. John Milius’ xenophobic workout emerged at the height of the Cold War, as Reagan’s red-baiting rhetoric was openly declaring the USSR the “Evil Empire.” Yet in this remake by debuting director Dan Bradley (stunt coordinator and second unit director of the Bourne and Spiderman sequels), the choice of enemy is as arbitrary as it seems: in the more-or-less complete version of this film shelved in 2010 because of MGM’s financial difficulties, the invaders were in fact Chinese, come to ‘repossess’ an America that defaulted on its massive loans, and it was only when the producers came to realise the folly of antagonising a film market as lucrative as China’s that the villains’ identity was cynically changed in post-production to North Korean. After all, the film’s other-fearing ideology sits well with a mindset that regards all Asians as the same, and therefore essentially interchangeable.

Details of how this national invasion actually works are dripfed but remain sketchy, the film instead focusing on teen rebels’ rites of passage into the American way of NRA-approved patriarchy. For this new bratpack, led by Marine-on-leave Jed, comes of age learning to kill with guns and to become just like daddy (“I want you boys to do what I would do”, are Eckert senior’s dying words) – though better, the film suggests, if father is a defiant (white) cop rather than a quisling (black) mayor. Jed makes men of all his followers – even, apparently, of the women. In a hilariously telling scene, one of the boys declares that what he misses most from the pre-invasion days are the women. When the two women present raise a quizzical eyebrow, he specifies women “without AK-47s”. Another of the boys, gun in hand, claims to miss Call of Duty Modern Warfare.

So there is the occasional subversive note introduced, especially when the ‘patriot’ Wolverines fight for their all-American freedom using ‘Viet Cong’-style guerrilla warfare and even the kind of terrorist tactics recently practised by militant Jihadists against the US – but for the most part Red Dawn represents the kind of unreflective jingoism where not much good sense is to be expected.