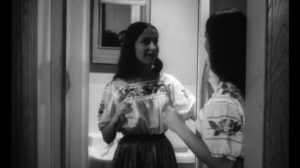 “I had never seen anything like it, except in the movies of course. I was already beginning to feel like a movie star.”

So says Teresa, a virginal Mexican girl from the country, as she undresses in her new en suite bathroom, the luxurious likes of which she has never before experienced. Sharon Saxon may well have thought that she too, like the character she plays, had made it big. After all, it is not every actress who gets the leading part in their movie debut. Yet this was also to be her last onscreen appearance. If she dreamed, like Teresa, of stardom, then tragic disillusionment would quickly follow.

In Teresa’s case, this is because, although she imagines she has just been employed as a maid in the Tijuana mansion of Rita Alverado (Anita Crystal), in fact she has just taken up residence in a brothel where she will be imprisoned, starved and repeatedly raped to break her in, before being forced into sexual servitude to an endless succession of male johns who treat her like “an animal or a slave in the marketplace.” And that is before she is sent to the ranch run by Rita’s sister Carmen (Velia Martinez), where pregnant or otherwise uncooperative women are kept in stables, tortured and murdered.

In other words, The Devil’s Sisters is a prurient tale of female exploitation, full of unexpectedly shocking detail (at least by 1966 standards) – and it is also itself an exploitation picture, with its scandalous story drawn straight from the then recent cause celebre of the Gonzalez sisters (nicknamed Las Poquianchis), who abducted and prostituted local Mexican girls over several decades, murdering around 100 before one managed to escape and tell her tale. Florida independent filmmaker William Grefé (Death Curse of Tartu) and his co-writer John Nicholas took the ‘material facts’ of their story from the sisters’ sensational 1964 trial, changed all the participants’ names, and released their film on the grindhouse and drive-in circuit in 1966. Two years later it was rereleased by a different production company under the name The Sisters of the Devil – and then for some four decades all trace of the film disappeared, until Grefé was able to track down a print in Germany. By an ironic twist of fate, this print was missing its final reel, ensuring that the film’s only complete departure from the facts of the case – a climax in which one sister is gunned down by the police, the other vengefully clubbed to death by her own female captives – seems destined never to be seen again (on the DVD, the missing final eight minutes have to be reconstructed with storyboards, the odd still, and commentary from Grefé himself).

Shot in black and white over a mere 10 days in Grefé’s native Florida (standing in for Mexico), and cast largely with exiles from Castro’s Cuba (standing in for Mexicans), the film offers a parade of abuses (women raped, burnt alive, tortured with barbed wire, etc.) as witnessed and experienced by an unfortunate young woman entirely subjugated to the sadistic will of others – although she does regain a measure of control over events in her capacity as the film’s retrospective narrator, recounting what happened from a village farmhouse where she is recovering from the ordeal that she has survived. Teresa’s status as narrator also problematises the gaze of any filmgoer looking for uncomplicated voyeuristic thrills. For although she is repeatedly objectified by the sisters, their henchmen and their clients, Teresa’s voiceover keeps reminding the viewer of what everyone else tries to deny: her perspective as a victimised subject. 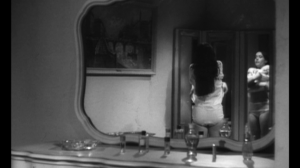 Which brings us back to that scene with Teresa in the bathroom, fancying herself a movie star. As she blithely admires herself in a mirror, her reflected image is reflected again in a second mirror, so that she appears alongside her glass ghost, even as our own point of view is doubled. For we see not only this young woman undressing and bathing, but also Rita’s henchman Jose (William Marcos) spying, Psycho-like, through a peephole at the intimate goings-on. “It was many days later I found out Jose and Rita watched my every move,” declares Teresa’s voiceover – but at this moment, we see events from the twinned perspectives of both predatory hunter and oblivious victim, and we are made privy all at once to Teresa’s present innocence and later experience.

So, in this room of mirrors, as a virgin watching herself for the very last time with pleasure is also watched with very different pleasure-seeking eyes both by Jose and by us, we momentarily lose ourselves in the different layers of spectacle, unsure whether we are being allied with rapist or prey. It is a naked reflection of an exploitation film about exploited women, and as such the metacinematic moment when The Devil’s Sisters truly comes into its own, taking a hard look at both itself and its viewers – although no doubt Sixties exploitation trainspotters will revel in everything else that has been unearthed here too, including the film’s charmingly coy approach to a litany of outrageous depravities.

Lost for over forty years, The Devil’s Sisters has been rediscovered and released on DVD through www.realitysedgefilms.net, with the final missing eight minutes partially reconstructed, a range of excellent contextualising extras and the full participation of director/co-writer William Grefé.

This entry was posted on April 22, 2013 by rantbit in Uncategorized and tagged Cinetalk, exploitation, Gonzalez sisters, Las Poquianchis, William Grefe.