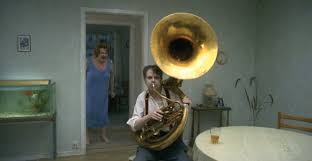 Synopsis: Roy Andersson’s fourth feature uses bleakly comic tableaux to illustrate humankind’s everyday quest for happiness, if not the meaning of life itself.

Review: “Be pleased then, you the living, in your delightfully warmed bed, before Lethe’s ice-cold wave will lick your escaping foot.”

It is not every film that begins with a grim memento mori taken from Goethe’s elegies, but then there are very few other films quite like Roy Andersson’s You, The Living – apart, of course, from the same director’s previous, Cannes prize-winning Songs From The Second Floor (2000). Here, as there, conventional linear narrative is replaced with a series of 50 or so living tableaux, each unfolding like a bone-dry gag whose precise punchline is lost on the players.

An unnamed city shrouded in fog. A bar where last orders are always being called. Depressed Mia (Elisabet Helander) seeks solitude and solace in alcohol. Anna (Jessica Lundberg) fantasises obsessively about a life of happiness with a gothic singer. An elderly man with a walking frame drags his supine dog along the street. A tuba-player (Börn Englund) annoys his wife and neighbours with his loud practising, and complains lugubriously, during sex, about his diminishing pension plan. A schoolteacher (Jessica Nilsson) who has argued with her husband bursts into tears before her young pupils. The disappointment of a professor (Patrick Edgren) with his son surfaces in the middle of an academic jubilee. A psychiatrist (Håkan Angser) complains of his increasing exhaustion at the egoism and meanness of his patients. A carpenter (Leif Larsson) stuck in a traffic jam relates a dream of being put in the electric chair for a prank. A woman tries to exercise the mind of her dementia-afflicted mother by recalling all her very worst memories. A businessman (Gunnar Ivarsson) in a restaurant boasts arrogantly of his wealth and the quality of life that it brings, without noticing that he has fallen prey to a pick-pocket (Waldemar Nowak). An ill-humoured consultant (Ollie Olson) has a bad hair day, made worse (or possibly better) by the sudden death of a company executive.

Beginning with a dream of bombs falling from the sky, ending with a blank vision of the apocalypse, and filling the space between with a litany of human disconnection, misery, frustration and despair, You, The Living would be an almost unbearably bleak mosaic of our living deaths, were it not for Andersson’s profound appreciation of Chaplin’s observation that comedy is tragedy seen in long-shot. Each scene is lit softly without any shadows, composed with the intensity and banal beauty of a portrait, and shot wide by DP Gustav Danielsson’s unforgiving camera (which hardly ever moves). The resulting effect serves to amplify the trivial (yet profound) absurdity of all these situations. We might wish that these lost souls could see themselves as we see them, but then, by recognising a part of ourselves in them, we too become part of the film’s comic fabric. Our own quotidian tragedies, Andersson suggests, might be equally funny when viewed by someone else.

If the largely non-professional performances in You, The Living convey a sense of everyday naturalism, then this is repeatedly unbalanced by a series of alienation effects. Characters talk directly to camera, and even occasionally express themselves in song. White make-up lends everyone the otherworldly pallor of the undead. Elaborate dream sequences are presented with the same flat visual tone as scenes of ‘reality’ so as to be stylistically indistinguishable from them – and the film’s final, ethereal image recalls the opening scene in such a way as to leave it unclear where exactly dreams end and life begins. For, according to Andersson’s deadpan philosophy, we the living sleepwalk through our existence like zombies, commuting amid a vale of mist before eventually reaching the oblivion of Lethe. You call that living?

In A Nutshell: Is that all there is? Andersson’s painterly episodes present life in all its drab banality. It is enough to drive you to drink, dream or despair – but it is also absurdly funny and comes with a philosophical core.

This entry was posted on June 19, 2013 by rantbit in Uncategorized and tagged Film4, Roy Andersson, tragicomedy.